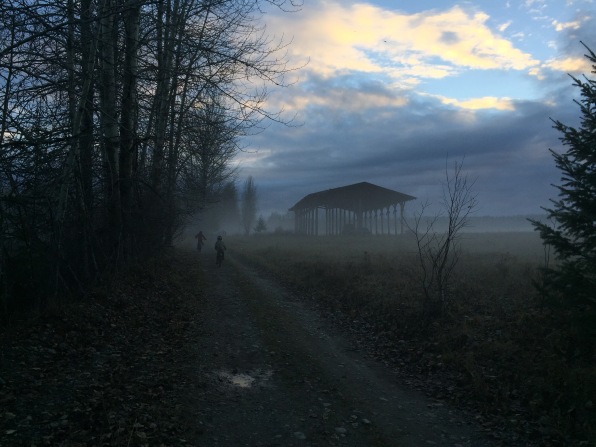 Sometimes my 15-month-old want’s to go outside so badly, the kids and I just don’t have the heart to say “No”. He brings you his shoes and says “sh, sh, shhhhh…” (shoes) and we melt.
Anyways, It was about that time of day when I’m suppose to know what were having for supper… and should be working on it. But instead we all piled on our bikes, plunked the baby in his captains seat, and wen’t and got the neighbor boy. The Little boy down our street makes any-old “bike trip with Mom” more exciting for my kids.
With the neighbor boy blasting ahead with my oldest, and Elise and Sammy trailing behind, we entered the large acreage behind our property. The moss covered old grey gate threw back one of it’s arms as if to usher us in.

To the secret world.
Where the game is played.

It was silent except for the sound of bikes whizzing through the puddles that lined the long, long, soggy dirt road. The road blurred out at the end, and the closer we came, the more of it disappeared. It was like it was becoming erased and soon we would bike off

Fog. It filled my nose, curled the tendrils of my hair. It was glorious.

It hung on the tips of wheat, hushing the field, making it yield with it’s palm.

It slithered it’s self around an abandoned farm shelter, teasing the old boat ground firmly in rich farm soil. That boat.  The one that dreams of floods.

The trees popped their noses up like they were going for air, the fog tightening at their throats. It hypnotizes the world, willing all to be still and silent.

But those bikes.
Those children.

They laugh and break through the clasped fingers, sending fog rolling off to the sides.
They fly through the spell unharmed.
Well, except for me… (I get a bug good and lodged into my eye ball. It pricks me endlessly till I remove it with a q-tip at home. Garth! Why always my eye?!)

But the fog? It pushes at our backs with dusk, urging us through the gate, before it slinks back to it’s game, without kids.

The fast children bike fast,
and the slow tug from behind,
and I peddle that little Outside-Baby back to the safe house.

I make creamed veggie soup with cheese and pepperoni, and Jonas helps me whip up some biscuits that we slather with homemade jam. We sit happily and I mull over thoughts of the Creator- and His fantastic world. 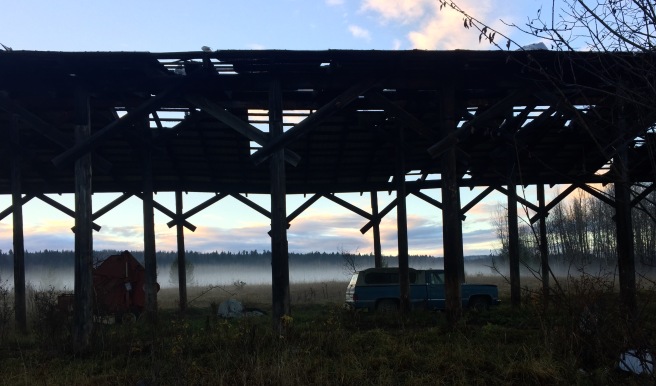 View all posts by vondavies